Happy Halloween Everyone! This weekend seemed to fly by. Saturday morning my Mom and  I ran a 5k trail run in Parvin State Park for United Way. This small race was already on my calendar as something fun to do.  Runners were encouraged to wear costumes in the Halloween spirit.

I had rode my bike to Parvin before, but never stepped foot on their running trails and didn’t know what to expect. The 3.1 mile loop around the lake was great. There were some tree stumps and roots in the trail, but they were clearly marked with neon orange spray paint. Besides doing the run the vineyards trail run, that wasn’t really a trail but running through the grassy vineyard I would count this as my first actual trail run.

The scenery was great and it was peaceful getting glimpses of the lake through the trees. At the end of the race there was a health expo with lots of little free giveaways and snacks. Happy to report my Mom and I both placed in our respective age groups and it was the only to get a medal from this race. Who doesn’t like some special Halloween themed bling!

After the race it was time to get ready for a photoshoot for Savage Multisport! If you are on Instagram you need to head on over and follow @Savagemultisport the newest tri team! Big news coming on Savage Multisport soon, just keep on following them on insta and I will fill you in as soon as their website is up!

I’ve got one more run to finish out 2017. Already started marking some races on the calendar for 2018 that I would like to do! Rounded out the evening by spending the evening with my family and Nigel at Menz for a Halloween haunted themed dinner!

Let me clearly explain I actually went to Miami with no intention on racing. I was headed to Miami Thursday afternoon to support my boyfriend-Nigel who was racing his fifth 70.3. For those of you unfamiliar with the ironman distance, here’s the breakdown. Swim 1.2 miles, bike 56 miles, and run 13.1 miles=70.3. Double the distance and you have the grueling full ironman 140.6 miles to be completed in one day. 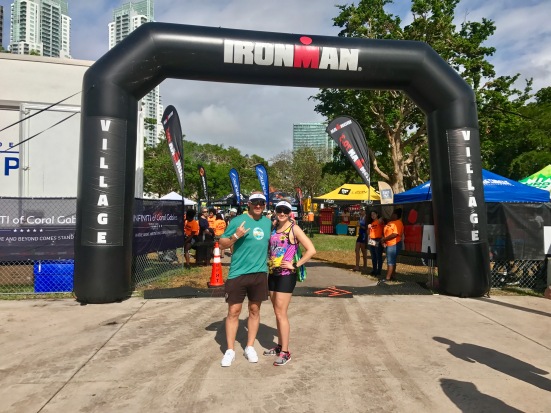 After flying a four day trip I swapped out some clothes thinking I would get some great workouts in sunny South Florida and cheer on Nigel on race day. Here’s where the monkey wrench got thrown into the plans-three of his friends were also racing, one had registered twice by accident and was able to pass on the second unneeded bib to me. Was this the best idea, probably not, but what did I have to lose? Nothing really.

Time for an ocean swim

So now I had a race bib. Time to mentally prep for this monster of a race I was taking on. But wait, I didn’t even have my bike, helmet, or biking shoes! Luckily there was a bike shop Miami Beach Bicycle Center, that legit got me in and out in a matter of 15 minutes. Rented a Scott road bike, they gave me a helmet to borrow and got some new shoes to wear.

Skipping all the other little details I was able to get nutrition together, I had sneakers with me, and lucky enough Savage Multisport supplied me with a sick kit to race in. Now lets talk about the actual race details.

My swim heat was set at 8:31am in the 30-34 female age bracket. The swim took place in Biscayne Bay. You might think to yourself, oh a bay swim, that would be pretty calm. The complete opposite! It was so choppy with current that did not work in our favor. I was getting slapped in the face by waves and pushed around, but I was determined not to give up. Once I made it about half way through the course I was mentally talking my way through it. Just make it to the next buoy. There’s no turning back now. Why would you give up and disappoint yourself, you are doing just fine. Miraculously, I made it to the end of the swim in 48:43. Whew! I was exhausted. Time to get to my bike and eat something! I needed to get my energy back up.

New bike, new shoes, but it was smooth. I rolled out of transition and was feeling pretty good. I watched my speed for some of the time and thought I am moving pretty well. I felt comfortable until we hit the turn around point, then got smashed with a head wind! It wasn’t pretty. My speed went down from 22 to probably 10. This was a super flat course so there was no getting a break, just keep pedaling. What I noticed and others did make comments about was the amount of drafting that was occurring. People that had friends to race with were drafting off one another to help get a break from the wind. Totally against the rules! I finished out the bike in 3:37. It wasn’t pretty, but I got it done.

Finally, the last piece of the puzzle and my comfort zone, running! I had to do 3 laps in order to get my 13.1 miles in. My plan of action was to take the first three miles slow, around a 11 min/mile pace and just try to ease into things. I felt good and happy. Being happy at that point in the game was key to me. I was having fun! By the second lap I was getting anxious to finish. The water/aid stations were a bit unorganized being worked by younger kids. They were doing their best, but just couldn’t keep up with the flow of people. I never even got a coke. I saw Red Bulls once and if you really needed something it was almost best if you grabbed it for yourself. I have to add it was nice to see two familiar faces on the course. As the laps passed I was able to see Nigel and others several others a few times. Just to see a familiar face really helps to amp you up after you have been racing for over 4 hours. I averaged a 10:20 min/mile finishing in 2:07:52.

That 3rd and final lap I literally couldn’t contain my excitement. When I turn down the finishers shoot I gave it all I had left in the tank-sprinting to the finish! 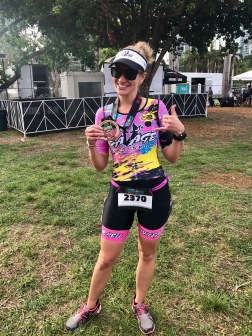 Who was there to greet me and put my medal around my neck? Nigel! What a way to end my first half ironman. My finishing time was 6:39:34

My final thoughts on the ironman 70.3 Miami. It was tough. I broke it down piece by piece. Swim. Bike. Run. It’s not just about being physically able to do it, but also mentally tough enough to get through it. At the end of the day I can say I competed to the best of my ability and still felt strong at the end of the race. I used Miami 70.3 as a learning experience and since I wasn’t actually planning on racing there are obviously some things I would plan on doing a bit differently in the future. My family was supportive and encouraging from afar and that meant the world to me. Thanks Nigel for your words of wisdom pre race it helped to calm my nerves.

I have officially completed a ironman 70.3 and I can’t wait until next year to complete another. Victory is sweet! 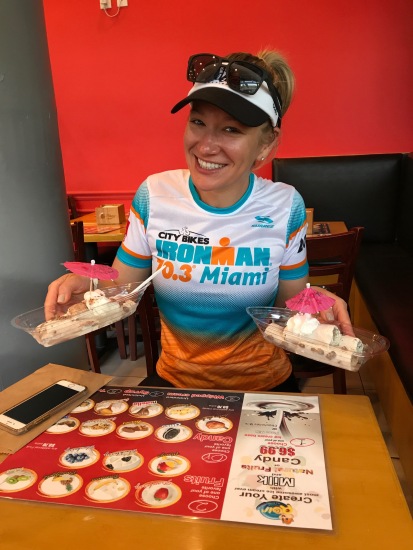 What a weekend! First off I can’t believe it is already October! As I said goodbye to September-Friday I was able to take part in an open water swim (OWS) at Mountain Lake. The water was absolutely beautiful and so warm. We did wear our sleeveless wetsuits, but the water temp was probably close to 70 degrees. This was defiantly one of the nicest lake swims I have ever done!

Saturday morning included a chilly 26 mile bike ride in Harriman State Park. Nothing like a few hills to wake you up and what happened to the warm weather?!

Sunday I took part in the Cow Run 10 miler. I did this run last year and it is really great so why not run it again. It’s a point to point race. School buses take you to the starting point, Cow Town Rodeo. In the very beginning of the race you actually run through the field where the cows are. Some cows actually cross the running path this just may be the key to put a little pep in your step.

My goal for this run was to keep my pace steady and try to speed up at the end. I am happy to report that I held my 8:30 pace and got my last mile down to 8:06. I felt pretty comfortable during the race. There were some rolling hills within the first three miles of the run with the maximum elevation being 74 feet to climb. Out of the 222 runners I was the 13th female. 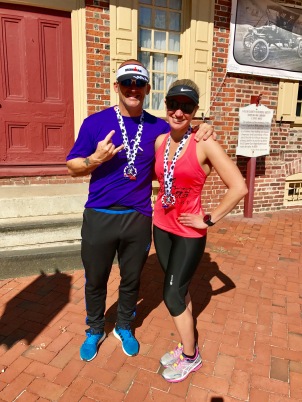 Overall great day for a race to welcome in October! Now to enjoy the weather before it gets to cold! I’ve got lots more training to do in preparation for my first ultra!!!!

Got to get moooooo-ving!! (I know bad cow joke, but I couldn’t help myself!)